There was really no other place to put this service, besides where it used to be, in the breezeway - where it belongs

The utility was not available to consult during thanksgiving / Christmas / covid
so I finally took the initiative and just pinned the tail on the donkey. Yes it has been that long.
There were some other items of discussion, but those have been resolved.

The only two issues remaining for this installation are:

And then I will hang up my spurs and only do what I like to do better anyway, which is troubleshooting. Anyway...
no more heavy lifting

*requiring 36" clearance to a window that doesnt open that side.
Our Standards department has confirmed that the 3’ clearance around windows applies to non-operable/fixed windows as well.
Looks like I will have to add a sweep to the top, point it away from the house and they can hang the attachment from the sweep.
Or just an extension. Luckily I left the wire long "you can always cut it, but you can't stretch it"
And the only thing about periscopes is I remember

but maybe...
I don't see that in the PGE greenbook. I don't think it is a NEC requirement either.
If it had to be a solid unbroken pipe, I would have to pull down the periscope and the wire and rehoist - eh

The next issue is bollocks, I mean bollards. Said I had to use the special PGE approved materials code number part from the AllWire approved manufacturer
The inspector told me requiring bollards in general in this application was an unreasonable request, but then again he is my same age :/

I called AllWire Bay Area rep told me that the PGE part number 234188 is 2” diameter, Schedule 40 galvanized pipe with reflective tape (2” wide) and a steel cap is not any special part he can sell me

He said "he's been doing this 42 years. Just dig down 3' and pour concrete around the 2" Rigid"

Well, that's not all he told me, but good enough for polite company
-
almost done!

I hate dealing with power companies, and I hate putting services together. The last 4 or 5 people who have called me to come look, I've told them I don't do that kind of work.

I had a lot of fun troubleshooting a hillavator one time, and a modern 2 story italian carousel, and I do like bolting together erector sets

12kv with guys that use battery cables for ground and Dixie cup and a string for comms... lemon pledge for maintenance

Weatherhead needs to be above the POA as well. Go up just a bit further.

ptonsparky said:
Weatherhead needs to be above the POA as well. Go up just a bit further.
Click to expand...

you think I can extend?

Is the POA within the three feet?

It’s not the riser that needs to be 3’ from the window. Just the service drop conductors/connections. Around here once your above the window height that does not apply which is what your picture shows.
H

Sorry, I fail to see why some people insist on requiring stupid things that aren’t part of the code just to flex some muscle
the window is fixed, as in not operable...

Doesnt that make it a clear wall??

wyreman said:
you think I can extend?
Click to expand...

Yes. The one-piece rule applies to free-standing masts. Yours is attached to the wall.

my neck of the woods 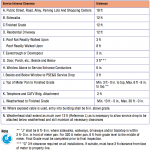